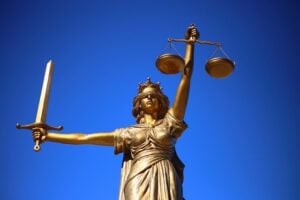 The only way this could be considered just is if Justice is actually blind.

Besides felony murder, one of the things that really ground my gears in Crim Law was how rigid the concept of immediacy played in self-defense cases. A popular moment in recent times involved Kyle Rittenhouse, with many trying to decide if his claim to self defense for fear of an immediate danger was mitigated by his alleged provoking or previous sentiments that would have valorized accidentally being pushed into a situation where one “had” to defend themselves, à la Cartman.

But the thing that really stuck with me was “Battered Woman Syndrome.” Name aside, it’s a defense occasionally raised that shifts self-defense from a focus on the immediacy of violence toward acceptable responses to violent contexts. The defense isn’t always raised in the context of a marriage — it can also come about in response to sex trafficking.

[Pieper] Lewis was 15 when she stabbed Brooks more than 30 times in a Des Moines apartment. Officials have said Lewis was a runaway seeking to escape an abusive life with her adopted mother and was sleeping in the hallways of an apartment building when a 28-year-old man took her in before trafficking her to other men for sex.

Lewis said one of those men was Brooks, who raped her multiple times in the weeks before his death. She recounted being forced at knifepoint by the 28-year-old man to go with Brooks to his apartment for sex. She told officials that after Brooks raped her yet again, she grabbed a knife from a bedside table and stabbed him in a fit of rage.

Police and prosecutors have not disputed that Lewis was sexually assaulted and trafficked. But prosecutors argued that Brooks was asleep when he was stabbed and not an immediate danger to Lewis.

Thankfully, Lewis will be able to walk away with probation. However, the judge was required by law to make her pay $150k in restitution to the family of the 37-year-old man who was accused of raping her.

Donors to a GoFundMe appeal have raised enough money to pay the $150,000 restitution an Iowa court ruled a teenage human trafficking victim must pay to the family of her accused rapist, whom she stabbed to death.

“[T]his court is presented with no other option”, Porter said, noting the restitution is mandatory under a state law that has been upheld by the Iowa supreme court.

A former teacher of Lewis, Leland Schipper, organized the GoFundMe appeal, which by Wednesday lunchtime had surpassed the required amount. “I am overjoyed with the prospect of removing this burden from Pieper,” Schipper wrote, adding: “A child who was raped, under no circumstances, should owe the rapist’s family money.”

Because Leibniz was wrong, one of the darker moments of the case was the prosecution’s line of questioning at trial.

Prosecutors took issue with Lewis calling herself a victim and said she failed to take responsibility for stabbing Brooks and “leaving his kids without a father”.

I know that everyone has a right to a lawyer, but it is a wild ride to read a prosecutor ask a 17-year-old why she didn’t do a better job of not being raped enough to not have to stab a man double her age. For what it’s worth, reframing the issue as “leaving his kids without a father” was a masterful way of sidestepping the little issue of committing what was at minimum rape of the statutory kind and taking part in sex slavery.

I wish the best to Lewis. I would also like to add that any 30+ year old men with children thinking about violating someone’s autonomy for a few moments of them feel good chemicals should think about the well being of their loved ones before they go ahead with raping someone else’s child. Maybe go watch some Netflix like a normal person? Thanks.

Appeal Raises $150,000 For Girl Ordered To Pay Family Of Accused Rapist She Killed [The Guardian]