A VIEW FROM THE COURTROOM


By Amy Howe and Mark Walsh 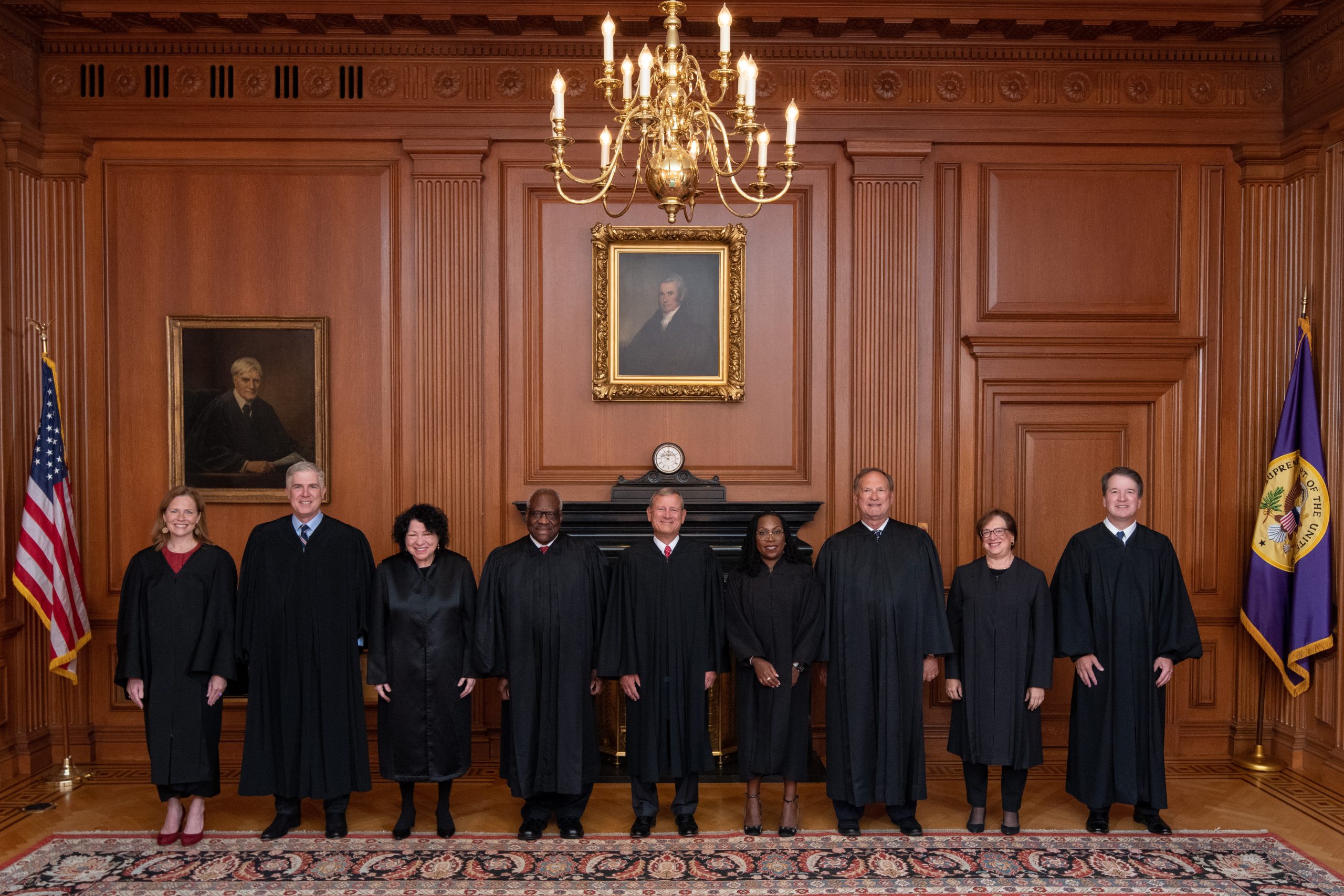 The justices in their conference room before Friday’s investiture ceremony for Justice Ketanji Brown Jackson. (Collection of the Supreme Court of the United States)

A View from the Courtroom is an occasional series offering an inside look at oral arguments and opinion announcements (and other Supreme Court events) unfolding in real time.

In the wake of last term’s controversial decisions, and with the Supreme Court’s public approval ratings at historic lows, some of the justices have recently been taking potshots at each other in the media. But on Friday, the justices appear to put aside their differences, at least for a day, for a happier occasion: the investiture of Ketanji Brown Jackson as the court’s newest justice – and its first Black female justice.

Jackson was sworn in as the court’s 116th justice on June 30, and she got to work quickly after that.

So Friday’s investiture is largely a formality, at which the court will officially receive Jackson’s commission. It also serves as an opportunity for the court to publicly welcome Jackson and for her to celebrate with her family, friends, and supporters.

With both President Joe Biden and Vice President Kamala Harris expected to attend, security on the streets around the court is tight on Friday morning. Inside, a large crowd mingles on the first floor before being ushered upstairs to take their seats in the courtroom. The court’s Great Hall – the large, open area immediately outside the courtroom – is already set up and decorated for the party that will follow the investiture.

In the courtroom itself, every section is packed knee to knee, with members of Congress, former Justice Department officials, lower-court judges, Supreme Court staff members, and others.

Sasse, the only Republican lawmaker in attendance, voted “nay” on Jackson.” In a statement released by his office after the ceremony, he stresses that “Justice Jackson and I have disagreements about judicial philosophy, but we both love this country.” Sasse also weighs in on the public debate “about whether or not the Supreme Court has lost its legitimacy,” calling it “a load of bunk.”

From the House, Speaker Nancy Pelosi arrives, and District of Columbia Delegate Eleanor Holmes Norton is in the bar section as well. Four other members of the House are present, according to a White House list.

In the back of the courtroom, Sri Srinivasan, the chief judge of the U.S. Court of Appeals for the District of Columbia Circuit, where Jackson served for a year before being elevated to the Supreme Court, also arrives. Another of Jackson’s former colleagues from the D.C. Circuit, Judge Patricia Millett, is also here.

In the middle of the public gallery is Bryan Stevenson, the founder and executive director of the Alabama-based Equal Justice Initiative, who has argued before the court five times.

As 10 a.m. nears, spouses of the justices begin to take their seats in the VIP section. Jane Roberts and Ashley Kavanaugh are soon joined by Ginni Thomas and the spouses of three former justices: Maureen Scalia, widow of the late Justice Antonin Scalia; Mary Kennedy, wife of retired Justice Anthony Kennedy; and Joanna Breyer, wife of recently retired Justice Stephen Breyer. No word on whether they are discussing the Politico investigation, published Thursday afternoon, on the justices’ lapses in disclosing income earned by their spouses.

We learn later that Cathy Douglas Stone, the widow of Justice William Douglas, who died in 1980, is here today. She was present in July 2019 when the late Justice John Paul Stevens, who succeeded Douglas in 1975, died and lay in repose in the Great Hall.

At 9:55 a.m., courtroom police officers quiet the crowd and instruct everyone to take their seats. And then 10 a.m. comes and … nothing. Five minutes, then 10 minutes go by. It appears we are on White House time this morning. A White House pool report, not available to us in the courtroom but consulted later, reveals that “the president walked out of the White House and into his car at 9:54 a.m.” The motorcade left the White House at 9:55 a.m.

Finally, some White House staffers arrive in the courtroom, clearly from the motorcade. White House pool reporters, who travel with the president, take their place in the “press hallway,” the back of the press section, which has obstructed views of the bench.

Attorney General Merrick Garland leads a delegation of his senior deputies along with the solicitor general’s office to the counsel tables. Retired Justices Kennedy and Breyer walk in and take their seats in the front row of the VIP section. And then Jackson’s daughters, Leila and Talia, and her husband, Dr. Patrick Jackson, take their places in the front row, soon followed by Jackson herself, who is led to the John Marshall Chair.

And finally, Vice President Harris and first gentleman Doug Emhoff enter, followed by President Biden and first lady Jill Biden. As they take their seats, one member of the press section sees the president give a friendly shooting gesture toward someone in the congressional group. The presidential party is seated just in front of Thomas, who testified before the Jan. 6 committee on Thursday, reportedly repeating the false assertion that the 2020 election was stolen from former President Donald Trump. Thomas smiles, but there does not seem to be any small talk between them. 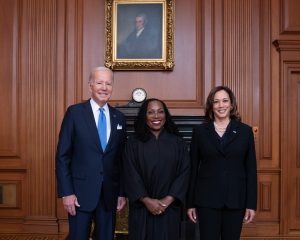 The president and vice president with the court’s newest justice. (Collection of the Supreme Court of the United States)

After all of the waiting, the ceremony itself is notably brief. The justices are seated on the bench according to seniority. This means that when the justices emerge from behind the curtains on Friday, all of the justices except Chief Justice John Roberts and Justice Clarence Thomas, who sits to Roberts’ right, go to seats that are new to them. Justice Samuel Alito moves into the seat, formerly occupied by Breyer, to Roberts’ left.

As in the courtroom itself, masking on the bench is sparse. Only Justice Sonia Sotomayor, who has diabetes and is therefore at a higher risk for complications from COVID-19, is wearing a mask.

Roberts welcomes the president and vice president, as well as Pelosi and the retired justices. He then recognizes Garland, whom President Barack Obama nominated in 2016 to fill Scalia’s seat. Garland makes a motion to have the court read the commission issued to Jackson by the president, officially naming her as a justice.

One of the biggest speaking roles in the investiture goes to Scott Harris, the clerk of the Supreme Court. He rises, puts on his glasses, and reads the commission out loud.

When Harris finishes, it is Jackson’s turn. She leaves the John Marshall Chair and is escorted to the bench by deputy clerk Laurie Wood. Roberts then administers the judicial oath to Jackson, with Harris holding a Bible for Jackson. As Jackson reaches the last lines of her ceremonial oath, her husband stretches his right arm behind his daughters and gives each of them a squeeze on the shoulder. Jackson then takes the seat reserved for the court’s most junior justice, on the far end of the bench from the press section.

Roberts concludes the ceremony by issuing a “very warm welcome” to Jackson. We are instructed to remain in our seats to allow the president and vice president to leave first, and then the ceremony is over. As we leave the courtroom to head downstairs to grab our phones from the press room, so that we can capture Jackson’s traditional walk down the front steps of the court with Roberts, servers are standing in the Great Hall with trays of juice and water for Jackson’s guests. 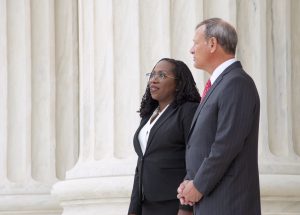 Jackson and Roberts begin the traditional walk down the marble steps. (Collection of the Supreme Court of the United States)

Pictures released by the court later in the day, including a group shot of the newest version of the Roberts court, show all nine justices wearing broad smiles. But with another term packed with high-profile and contentious cases set to begin on Monday morning, those smiles may not last for long.

The Top Law Schools That Just Won’t Quit US News