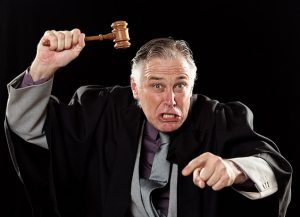 Judges can get mad and yell at people. It happens. In some instances, it might even be justified but it’s still inappropriate. The judge is the face of the justice system and running the courtroom like a fiefdom where they bully litigants and witnesses for their own ego aggrandizement is never acceptable. In the most egregious of cases, it should result in some form of discipline.

At the very least, the judge should recuse themselves from a matter after an egregious episode, if only to avoid the appearance of impropriety. It’s not just about the judge, it’s about the integrity of the whole system.

There appears to be a criminal complaint against New Jersey Judge Daniel R. Lindemann for assault. According to a document filed by one of the litigants before him, this complaint has been referred to a neighboring county (see, some people understand avoiding the appearance of impropriety!) and has already been assigned to a judge in that courthouse.

That matter is still pending, but stems from a series of incidents, the most serious of which ended with a litigant representing herself taken to the emergency room after the judge’s interrogation triggered the litigant’s heart condition forcing her to pass out and be taken by EMTs to the emergency room amid fears of severe organ failure.

Whether the judge’s conduct amounts to something criminal depends on a lot of things, at least one of which is how much the judge knew about the condition beforehand. On that score, the judge acknowledges prior medical adjournments and some of those came after other hearings that ended with the litigant being admitted to the hospital.

Putting aside the outcome of the criminal matter, this is the part of the pop quiz on judicial ethics where you’d expect the judge to have the matter reassigned. He’s been named in a criminal complaint initiated by the litigant and knows that his actions — even if he believes they were blameless — directly preceded the litigant ending up in the ER. Even if he doesn’t see himself as the proximate cause of that episode, there’s no way to spin this scenario into the foundation of a fair case going forward.

This isn’t the middle of nowhere! There are other judges in that courthouse… give it to them.

Yet, Judge Lindemann seems committed to forging ahead with a trial next week.

The Court has reviewed the subject 9/9/22 email from Defendant requesting an adjournment due to non-medical reasons. For the record, the Court’s prior 8/12/22 letter granted the fifth (5th) adjournment request of Defendant (all of the most recent, and prior five adjournments were based on Defendant’s medical needs and/or physicians providing a medical basis for an adjournment), and the within request is the Defendant’s sixth (6th) requested adjournment. The instant request for adjournment is denied and this matter will proceed on 9/19/22 at 10:00 a.m., which proceeding will be conducted “Live in court.”

He seems to be downplaying these medical adjournments as if they didn’t keep ending in the hospital.

Oh! And that’s before we add this nugget from the adjournment request:

In light of the foregoing as well as the fact that the N.J. OAG Civil Rights Division is conducting an investigation, DCR Complaint H2022-000748…

Are you kidding me?!? The AG’s office is potentially intervening in the matter! But the court wants to do the trial before the AG investigation concludes? I’m struggling to imagine a district judge moving forward with a civil trial after the DOJ indicated that it was investigating whether one side’s actions amounted to crimes. That’s just batty.