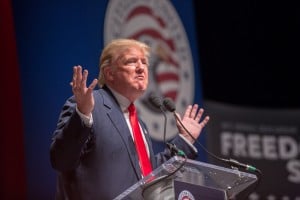 There is a reason that Donald Trump has such a hard time finding competent counsel, and that reason is Donald Trump.

In the face of multiple grand jury investigations of his various electoral schemes, a congressional inquiry, and most recently a search warrant to search his house for unlawfully retained classified documents, the former president has taken to the airwaves once again to discuss his legal troubles. This time his host was Hugh Hewitt, who never lets his JD from the University of Michigan Law School get in the way of his abject sycophancy and devotion to advancing the Republican narrative.

“Do you feel like the Department of Justice is trying to indict you, Mr. President?” Hewitt began, unleashing the inevitable torrent of Russia-infused verbal diarrhea from his guest.

Well, there’s no reason that they can, other than if they’re just sick and deranged, which is always possible, because I did absolutely, you’ve seen the legal papers, absolutely nothing wrong. And there’s no reason that they can do that. And I’ll tell you what, I would have said there’s no way they can raid a house, either, because you know, it’s 4th Amendment stuff. And what they did is terrible. And I don’t think the people are going to stand for it. If you noticed, the poll numbers are the highest they’ve ever been. The people are not going to stand for this stuff. They’ve weaponized the Department of Justice and FBI. And you know, I don’t know how big you’ve covered it, but I can tell you the biggest story would be, especially if it were, was reversed, that Danchenko was paid right after 2017, right after we were, so I’m sitting in the Oval Office, and the FBI paid, hired Danchenko to do all sorts of very terrible things. Now when you think of that story, that’s incredible, Danchenko being the Russian. So it was them, Hugh, with the Russians, not me.

Igor Danchenko is a minor figure in the Russia investigation who has been charged with lying to the FBI by Special Counsel John Durham. With the news that Durham’s grand jury is disbanding, even Hewitt can’t work up the energy to pretend to give a shit about Danchenko.

“Well, the Russia Russia Russia story is over,” he said, attempting to steer the former president back on track. “They are attempting, I think, to indict people for plans to select alternative electors on 1/6. Have you received a target letter, Mr. President?”

Trump responded in the negative, adding, “Alternative slates are actually common. I wasn’t involved with alternate slates, but I can tell you many people have been for many, many years doing alternate slates.”

Those would be “alternate facts.” Trump’s campaign was instrumental in assembling the slates of fake electors despite his lawyers understanding that it was totally illegal, and it is in no wise “common” to try to substitute them for the electors actually chosen by the voters.

After saying that he hadn’t been summoned to appear before a grand jury, Trump agreed with Hewitt’s suggestion that he’d declassified all the documents at Mar-a-Lago by magical secret incantation witnessed by former defense lawyer Kash Patel.

“Not only that, I think it was other people also were there,” he gabbled. “But I have the absolute right to declassify, absolute. A president has that absolute right, and a lot of people aren’t even challenging that anymore.”

Later he brushed aside a suggestion that he might have inadvertently kept the documents for 18 months after leaving office.

Notably, this is not an argument advanced by Trump’s lawyers in the special master case before Judge Aileen Cannon, the friendliest of friendly judges. Although they do dance around it, referring to “disagreement as to the classification status of the documents” and employing scare quotes around all references to “classified records.” But even Trump’s lawyers, as audacious as they are, never come right out and support this cockamamie theory that everything Trump took out of the White House and stuck in his pool locker was declassified — much less submit a sworn declaration from Kash Patel attesting to same.

Indeed, prosecutors called them out on this little wheeze in their latest filing in support of exempting classified documents from both the special master review and the prohibition on using seized materials in the ongoing investigation.

Also, let the record reflect that none of the statutes implicated in the warrant rest on the classification status of the government documents seized. And anyway, the subpoena which Trump ignored called for the return of all documents bearing classified markings, which are definitionally the property of the government. So irrespective of whether they were secretly declassified by Trump waving his hands over them as he packed up to leave the White House, the former president just confessed to knowingly retaining government property in defiance of a grand jury subpoena. World’s worst client!

Then Hewitt, after scoffing that prosecutors can indict a ham sandwich, asked if Trump would still run for president in 2024 if he’s under indictment. But Trump wanted to answer a different question, and that question was, how close can you get to inciting violence without actually satisfying the Brandenburg test.

“I think if it happened, I think you’d have problems in this country the likes of which perhaps we’ve never seen before,” said the man who summoned his supporters to DC for a rally which turned into an assault on the seat of government. “I don’t think the people of the United States would stand for it.”

“That’s not, that’s not inciting,” Trump scoffed. “I’m just saying what my opinion is. I don’t think the people of this country would stand for it.”

Odds that this little rantologue comes up in a future DOJ filing? Let’s go with 100 percent.

Elizabeth Dye lives in Baltimore where she writes about law and politics.