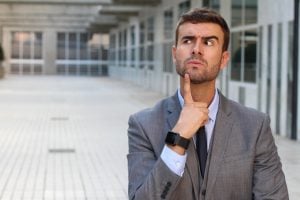 If a lawyer were inclined to improperly buy a client more time before a high-profile murder trial, it just feels like there are a lot of strategies to tick off the checklist before “pretend you had a stroke.” Like, you’d have to have every relative and college roommate, and pet die before going the stroke route, wouldn’t you?

That doesn’t necessarily mean attorney Matthew Tucker faked a stroke to get out of appearing at his client’s trial, but it certainly leaves me inclined to give him the benefit of the doubt. As it happens, Judge Shana Rooks Malone was not inclined to give Tucker that benefit and instead held him in contempt and said that she would report him to the state bar because, “There, however, is no indication that he had a stroke.”

What, exactly, does counsel need to provide beyond having someone inform the court that “a stroke has been had” that suffices here? The judge notes that this isn’t the first time Tucker has been late to court, suggesting that her suspicions are heightened due to a pre-existing pattern of behavior (even if it’s a pattern of behavior that could indicate a pending stroke).

That’s a pretty big hammer to pull out if it’s not true. When Tucker returns to court, is he going to show lingering physical symptoms of the condition. The much-ballyhooed but ultimately inconsequential John Fetterman debate demonstrated the difficulties that plague someone recovering from a stroke. Tucker presumably isn’t likely to bound into the courtroom and declare the stroke a non-event, meaning he’s either locked himself into a long and complicated web of lies or… he actually had a stroke.

“He failed to follow the rules of the court in notifying the court,” the judge added. Maybe a traumatic brain event is one of those occasions where we can ease up on the rules?

Again, maybe the judge is right and this is all a ruse. We just don’t know.

But where the judge is absolutely right is her suggestion that this defendant needs a new attorney. Because if he faked a stroke, that’s a huge problem, and if he actually had a stroke, that’s potentially an even bigger problem for someone on trial for murder over the next month or so. Let the attorney concentrate on recovery.

Here’s the whole statement from the judge per Law & Crime’s live coverage of the case:

Murder Trial Delayed as Judge Doubts Absent Defense Lawyer Actually a Had a Stroke, Finds Him in Contempt and Threatens to File Grievance with the Bar [Law & Crime]

Is Trump Hanging Onto Even More Classified Documents? His Lawyers Can’t Say. Or Won’t Anway.