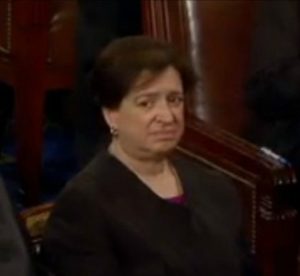 Justice Kagan watching you go all in with a 2-7 offsuit.

The legitimacy — or lack thereof — of the Supreme Court seems to be on everyone’s mind lately (or at least on the minds of Supreme Court justices). Recently, Chief Justice John Roberts gave a desperate plea, practically begging folks to see the Court as legitimate. This was followed shortly by Elena Kagan’s speech which is pretty much as a direct response to Roberts’s take on the current state of the Court.

But Justice Kagan has more thoughts. At an event yesterday at Northwestern University Pritzker School of Law in Chicago, Kagan took yet another shot at the Supreme Court’s legitimacy, as reported by Law360:

“A court is legitimate when it is acting like a court,” she said. “It doesn’t have any rights of authority to do anything else than act like a court.”

Dean Hari Osofsky, who was moderating the event, asked the follow up — what does it mean to act like a court?

The justice responded that courts have three main responsibilities: to follow precedent, use methodologies to reach decisions, and not do more than is necessary in rulings.

“When the court gets involved in things that it doesn’t have to, especially if those things are very contested in a society, it just looks like it is spoiling for trouble,” Justice Kagan said.

HMMMMM, I wonder what case Kagan is talking about? Methinks it’s the Dobbs case, don’t you? Let’s go through the checklist, shall we? It destroyed 50 years of precedent, used a bastardized version originalism with a sloppy historical analysis, and overturned Roe v. Wade and Planned Parenthood v. Casey eschewing the more measured approach in John Roberts’s dissent. And though reproductive freedom may be considered “controversial,” the real truth is that the Supreme Court’s Dobbs decision is wildly out of line with American values.

And for the racists in the back that just love to throw around Brown v. Board and the overruling of Plessy whenever someone brings up just how bad overruling Roe was, Kagan notes overruling precedent is not verboten, but should be used, well, judiciously, and under limited circumstances:

Justice Kagan said that significant change in society or technology must occur for court precedent to be overruled.

“You get to overrule a case when some significant change has occurred, and you don’t when it hasn’t,” she said.

For the record, detailing the significant societal changes that warranted the overturning of Plessy is exactly what the unanimous Court did in Brown. (Also, the fact that it was a 9-0 decision is another reason that the Court’s legitimacy was not hurt by the Brown decision and distinguishes it mightily from Dobbs.)

And of course, as is par for the course for Kagan, she also took a (deserved) shot at the Court’s shadow docket that has been widely misused by the current slate of justices in order to secure the policy outcome they favor without the messiness of a paper trail.

On the appropriate use of the emergency docket, Justice Kagan said that when she clerked for the Supreme Court the so-called shadow docket was used only for capital cases and that it should only be used in “rare circumstances.”

Justice Kagan, who has criticized use of the shadow docket in the past, noted that the docket is needed to address “real issues” such as district courts issuing nationwide injunctions that have halted policies under the Trump and Biden administrations.

“It just can’t be right that one district judge can stop a nationwide policy in its track and leave it stopped for the year that it takes to go through normal process. But I think there are ways, even in circumstances like that, where we are not just doing it like super fast, without any considerations from other appellate courts,” she said.

You can tell Justice Kagan thinks there are some deep problems with the highest court in the land — and she has some spot-on analysis to back it up.