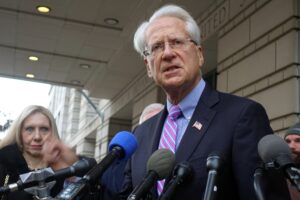 According to Larry Klayman, there’s a “jihad” looking to exile all pro-Trump lawyers from the profession. I mean, the profession may well benefit from such a purge, but that’s probably not what’s going on here. Attorneys who adjudicate ethics complaints are most likely to fall into a lawful neutral category, and act accordingly.

But, as you may imagine, the court had a different take, saying, “The record does not support Mr. Klayman’s repeated assertions of bias.”

Indeed, as reported by the ABA Journal, the court found the following of Klayman’s representation of “E.S.” in a sexual harassment lawsuit against Voice of America:

The District of Columbia Court of Appeals affirmed findings that Klayman:

• Represented E.S. at the same time that he professed his love for her in conversations and an email, creating a conflict of interest that impaired his ability to represent her.

• Failed to abide by the wishes of his client by failing to dismiss a lawsuit that he filed against the governing board of the Voice of America.

• Revealed client secrets as a result of his publicity campaign for her suit without obtaining the informed consent of E.S.

• Did not consent with E.S. before taking important steps in the litigation.

• Continued to take action in the case after E.S. fired him.

Klayman has repeatedly denied the allegations, even calling the case a “political hit.”

Disciplinary charges were brought against Klayman seven years after his former client filed a complaint with the D.C. bar’s office of disciplinary counsel. He says he discarded his records on the case because he thought the matter over.

Before being readmitted, Klayman must make a showing of fitness to practice law.