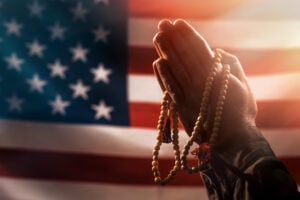 Remember when a former high school football coach said he was fired for saying “quiet” and “private” prayers and asked the United States Supreme Court to erase the Establishment Clause from the First Amendment and force the school to hire him back?

Well, it turns out that the coach — whose prayers were not “quiet” or “private” and wasn’t even really fired — got his wish. But Coach Kennedy hasn’t even bothered to show up for work.

Three weeks into the season.

O.J. put up a show of looking for the real killers longer than this guy acted like he cared about coaching.

From the Seattle Times:

“He’s had the paperwork for his reinstatement since August 8th, and we haven’t gotten so much as a phone call,” says Karen Bevers, spokesperson for Bremerton schools.

Instead, as the Bremerton Knights were prepping for the season in August, Kennedy was up in Alaska, meeting with former Vice President Mike Pence and evangelist Franklin Graham. On the eve of the first game, which the Knights won, Kennedy was in Milwaukee being presented with an engraved .22-caliber rifle at an American Legion convention.

On the other hand, Bremerton High School’s varsity football team is 2-1 right now, so I guess they didn’t need anyone praying for them after all!

It shouldn’t shock anyone that Kennedy might have led the Court astray about his desire to return to the sidelines because his whole case amounted to one misleading representation after another. Starting, of course, with the fact that he was never even fired.

“He was not terminated,” [School spokesperson Karen] Bevers said. The head coach at the time had moved on, as did most of the coaching staff.

This did not stop Kennedy’s lawyers from telling the Supreme Court repeatedly that he was fired.

“The record is clear that Coach Kennedy was fired for that midfield prayer,” lawyer Paul Clement told the nine justices in the first 15 seconds of the oral arguments of the case in April. The words “fired,” “fire” or “firing” were used 16 times in the hour and a half session.

Paul Clement took out a whole editorial to whine about being forced out of Kirkland for his beliefs, as opposed to being a stain on the firm’s reputation without providing any discernible upside. In Coach Kennedy’s defense, the guy hired one of the world’s experts in blaming everyone else for the consequences of your own actions.

The respectable conservative legal types told me this was a real example of religious liberty under attack. They said former SG Paul Clement would never misrepresent facts. They said the Court’s opinion was well-considered.

None of these seems to be true. https://t.co/RbwWdgAb9y

Still, as the school carries on holding open a coaching position that the plaintiff seems uninterested in doing, I wonder how much Paul Clement knew about his client. Did he know the coach hadn’t been fired when he said repeatedly told the Court that he had been? Did he know his client hadn’t even applied to get his job back? Did he know that Kennedy wasn’t going to bother to go back to coaching?

Because if he knew the correct answers to those questions when he went before the Court and said the opposite, that seems like a problem. Not for this Supreme Court, of course, but other entities might care about that.