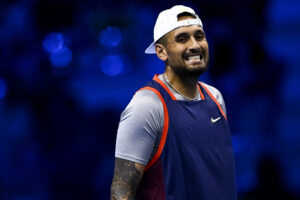 During this year’s Wimbledon men’s final, Novak Djokovic defeated Nick Kyrgios. But before that result was finalized, Kyrgios had a fan temporarily ejected from the match, saying she was, “drunk out of her mind.”

You can watch the exchange below.

But the ejected fan, Anna Palus, wasn’t just any tennis fan, she’s an attorney. As reported by Roll on Friday, that meant a defamation suit followed shortly:

Shortly after the tournament, the 32-year-old medical lawyer announced that although she was “not litigious”, Kyrgios had “made a reckless and entirely baseless allegation against me” and she had “no alternative” but to sue him for defamation “in order to clear my name”.

“Mr Kyrgios’s false allegation was broadcast to, and read by, millions around the world, causing me and my family very substantial damage and distress”, she said.

Now Kyrgios has settled that lawsuit — to the tune of a £20,000 charitable donation — and apologized:

“I told the umpire that a fan, who I now know to be Anna Palus, was distracting me during the match, believing that she was drunk”, said the world number 22. “I accept that belief was mistaken, and I apologise”.

“To make amends, I have donated £20,000 to the Great Ormond Street Hospital Charity, a charity chosen by Ms Palus”, he said.

Which just goes to show — don’t mess with lawyers, even if you’re a world-class athlete.