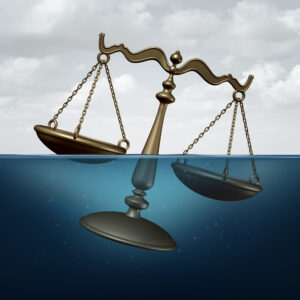 Justice is a lil wonky sometimes

Prosecutorial discretion, like jury nullification, is one of those quirks about our court system that only really works with good faith actors. Done well, it can be used to extend grace to a defendant found to be a victim of circumstance. Unfortunately, to err is human and Ronnie Goldy — one of Kentucky’s prosecutors — was caught being all too human.

Kentucky Supreme Court has suspended the license of a prosecutor who solicited nudes from a defendant in exchange for favorable treatment.

He remains in office, however, because only the state’s legislature can remove him. https://t.co/ao7bJm0eOl

The messages included several instances in which Goldy said he had done something to help Helton with a criminal case, such as having court dates changed or warrants recalled, then asked her for photos or videos, and at least two in which she sent him nude photos.

In June 2018, for instance, Goldy messaged Helton saying “When do I get to see a video.” Helton responded “When am I not gonna have a warrant hahaha,” according to Logue’s findings. Goldy messaged back “Lol. Good point. Incentives never hurt.”

Really, dude? Regardless of how many softcore videos you’ve watched in your spare time, who in their right mind would abuse their authority with this clear of a paper trail?! If you’ve ever been on the defending side of a person charged in Kentucky’s Bath, Menifee, Montgomery, or Rowan counties and had this guy opposite you, you have my permission to be pissed off. It is a sad day for the rule of law whenever you hear that police officers are getting caught committing perjury or planting drugs on witnesses, but to see prosecutors doing nonsense like this really can damper one’s faith in our legal system. Thankfully, it looks like we won’t ever have to worry about things like this going to the highest levels of our federal court. And it isn’t because Supreme Court justices’ neutrality are suspect because their wives are part of huge controversies or anything, despite that being the case.  The justices just don’t have a code of ethics that they could really be charged under. Whad’ya do?

Ky. Prosecutor Suspended After Inquiry Finds That He Sought Nudes From Woman [Kentucky.com]