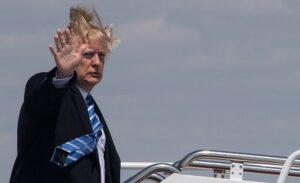 Donald Trump had a very bad day yesterday in a whole bunch of courts, up to and including the Supreme Court, which vacated the temporary stay of the DC Circuit’s order and allowed the House Ways and Means Committee to finally get his tax returns. But nowhere was the beatdown more brutal than at the Eleventh Circuit, where Trump’s lawyer Jim Trusty got ritually pantsed in his effort to defend US District Judge Aileen Cannon’s claim of equitable jurisdiction over the warrant to search Mar-a-Lago and seize government documents stored there.

The panel consisted of Chief Judge William Pryor, as well as Judges Britt Grant and Andrew Brasher, the two Trump appointees who ruled in favor of the government in the last round. Just two months ago, they signed on to an epic benchslap of Judge Cannon’s inclusion of classified documents in the special master review and injunction on the government using them in its criminal investigation.

Including the Chief Judge on the panel did not make it less hostile to Trump’s position. Within seconds of beginning his argument, Trump’s lawyer Jim Trusty was chastised by Judge Grant for calling the execution of a judicially authorized warrant a “raid.”

And it did not get better from there!

As before, the court’s analysis focused on the four-factor test for equitable jurisdiction set out in Richey v. Smith, 515 F.2d 1239, 1243 (5th Cir. 1975). There has been no suggestion that the government acted with “callous disregard” of Trump’s rights in seeking or executing the warrant, the first and most important Richey factor, so one might be forgiven for thinking that this alone should be dispositive. But Trusty, a former prosecutor, seemed to suggest that Judge Cannon needed to exercise jurisdiction first to determine if there had been an illegal search … which would then retroactively justify her jurisdiction.

When Judge Pryor asked Trusty how to square this with circuit precedent which requires a demonstration of illegal government conduct before the imposition of jurisdiction — “If it’s our circuit precedent, it binds us.” — Trusty responded, “Well, I understand what the court means. But…” and then launched into a disquisition on why the precedential decision was wrong, actually.

Trusty tried the same arguments that have worked with Judge Cannon, characterizing the government’s remit as a “general warrant” and accusing the FBI of inappropriately seizing piles of personal items as part of a fishing expedition. To which Judge Pryor remarked dryly “I don’t think it’s the fault of the government if someone has commingled classified and other government documents with personal property.”

Asked by Judge Grant what besides his position as former president entitled Trump to relief, Trusty attacked the “raid” (again!) as being staged by a “political rival.” Unsurprisingly, Judge Grant did not appear to be mollified, and Judge Pryor called the answer “not responsive.”

The Chief Judge also pointed out that, applying this logic, “We would have to be concerned about the precedent we create that would allow any target of a federal investigation to go into a district court and have it entertain this.” Indeed since Judge Cannon threw her robe over the grenade of this investigation, Trump allies Mike Lindell and John Eastman have demanded special masters in their own cases, too, although without success.

Indeed, there was very little for Sopan Joshi, on loan from the US Solicitor General, to do. Judges Brasher and Grant asked a couple of questions about Trump’s need for the documents seized, one of the lesser Richey factors, to which Joshi responded that Trump never argued that — although Judge Cannon did argue it for him — and anyway, the government already gave him most of his stuff back. Questions from Pryor were confined to the “Ain’t this some bullshit?” variety.

In sum it was a very bad day for Trusty and his client. And a busy one, too, since they just this morning asked Judge Cannon to unseal the affidavit in support of the warrant and let Trump see all the gory details of the government’s pending investigation. This motion was filed despite Magistrate Judge Reinhart’s prior ruling that “the Government has met its burden of showing a compelling reason/good cause to seal portions of the Affidavit because disclosure would reveal (1) the identities of witnesses, law enforcement agents, and uncharged parties, (2) the investigation’s strategy, direction, scope, sources, and methods, and (3) grand jury information protected by Federal Rule of Criminal Procedure 6(e).”

Let’s take a wild shot in the dark here that the affidavit is going to stay redacted and that special master Judge Raymond Dearie is about to find himself with some extra time on his hands. Because it’s only Tuesday, but this turkey appears to be just about cooked.