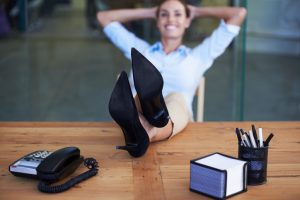 Times sure have changed, and lawyers are now sticking around at their firms.

We’re in a technical recession here in the US, and lawyers at the largest of law firms have been staring down a slowdown in work. What does that mean for the lateral market? Compared to the frenzied hiring cycle we saw back in 2021 and even at the start of this year, things have significantly cooled down, and associates and partners alike are staying put at their firms.

How is this return to relative stability in terms of personnel affecting Biglaw firms? For that, we turn to a new report from Law.com:

Lawyers are becoming “stickier,” especially as the fourth quarter approaches, both due to individual prospects and because of more deliberate hiring from law firms.

Julie Jones, chair of Ropes & Gray, said while there is still some pressure on the lateral market, her firm’s attrition has been at pre-pandemic levels and lower since the end of the first quarter.

“Now that things have cooled and people have their heads about them, people aren’t leaving. I know it reflects a shift in the market. We’re no longer in that war-for-talent phase,” she said in an interview. “You always need to keep and invest in your talent, but we don’t have that frenzy, and we see that in our attrition rates.”

It’s not just the slowdown in work that could be keeping people around at their firms. David Foltyn, CEO of Honigman, acknowledged that right now, folks at his firm “are a little stickier than they were last year,” but noted that it could be seasonal in nature. “The way most firms are structured, partners are not advantaged by leaving in the fourth quarter,” Foltyn told Law.com. “They need to be there to get their proper year-end, and my guess is the associates are waiting to see what kinds of bonuses they get.”

(On that note, of course associates are waiting for bonus season to roll around, and we can’t wait to start our annual coverage. Stay tuned.)

Beyond these compensation issues, law firm leaders are saying they’re seeing less attrition and it’s making it easier to rightsize their firms and manage the lateral activity that they do have.

The slowdown on the lateral market has also allowed law firms to return to strategic hiring. They can now be a little more selective in trying to expand their practices, rather than just trying to find as many bodies as they can to keep up with them and eating the costs later.

“They’re asking themselves a few more questions related to hires,” said Tony Williams, a London-based principal at Jomati Consultants and former managing partner of Clifford Chance. “Particularly in the States, where salaries have gone up so much in the last couple years, you have to think, ‘Do I really want to add another quarter million of costs if I think things are going to slow down a bit? Or do I want to wait and see what happens?’”

At this point, barring a major downturn in the economy, law firm financials for 2022 are significantly “baked in,” Williams said. But 2023 is still a major question mark. Most firm leaders he’s speaking with are strategizing based on a simple rule of thumb. “Hope for the best and plan for the worst,” he said.

What’s going on at your law firm? Are associates sticking around and waiting for bonus season to begin, or are they just waiting out the work slowdown to see what the future may bring? Please get in touch with us and let us know. Email us at tips@abovethelaw.com or send a text message to (646) 820-8477.

Staci Zaretsky is a senior editor at Above the Law, where she’s worked since 2011. She’d love to hear from you, so please feel free to email her with any tips, questions, comments, or critiques. You can follow her on Twitter or connect with her on LinkedIn.

Enter your email address to sign up for ATL’s Bonus & Salary Increase Alerts.