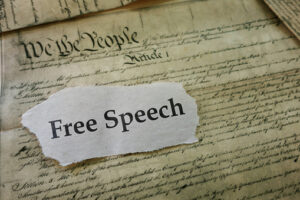 As former U.S. Solicitor General Paul Clement would have you believe it, the scourge of “wokeness” is among us. Presumably he’s felt some hostility after defending the people that make children-killing tools and those who don’t want Ellen DeGeneres to be able to get married. He’s not the only one noticing a change in the Overton Window. Bigo… those who hold different political opinions about whose lives are worth caring about, want protections for their beliefs, and of course, they are piggybacking off the civil rights movement to do so. Who am I kidding, they’re bigots. Just look at their chat logs:

MTG is still defending speaking to this group. pic.twitter.com/quc9xLEt62

The bigots want civil rights protections to be able to say hurtful things about people. That’s the news.

Republican politicians often ask what they can do in office to combat “wokeness.” The best approach is to amend state and federal civil-rights laws to protect employees from discrimination on the basis of political beliefs.

Disney fired actress Gina Carano after she compared the treatment of conservatives on social media to Nazi persecution of Jews. The company called her post “abhorrent and unacceptable,” although co-star Pedro Pascal wasn’t sacked for likening Trump supporters to Nazis. Longtime Sacramento Kings broadcaster Grant Napear lost his job for tweeting “ALL LIVES MATTER.” A Virginia high school teacher was fired for refusing to use a student’s “preferred pronouns.” A software company dismissed an employee for posting a TikTok video complaining about Bronx bodegas. A USA Today editor was demoted for tautologically tweeting: “People who are pregnant are also women.”

This is un-American, and it’s also counter to the spirit of the Civil Rights Act. You can’t be fired for expressing your religious beliefs or gender identity. Why can you be fired for your political beliefs?

Let’s run down this list, shall we? Gina Carano’s claim is goofy. Like, facially so. Google knows everything. Where on Google Maps can you find the Auschwitz targeting conservatives on social media? Now as far as Pedro Pascal’s saying Trump supporters are like Nazis… there are literal Trump supporters rehashing Nazi talking points. They’re pretty loud about it too.

Guess who spoke at this guy’s conference?

Guess who promised to give her a more senior role when Republicans took Congress?

Guess who is considering her for VP?

No need to compare Republicans to Nazis. They do it themselves. https://t.co/L0Rcd5q2K7

Tweeting “All Lives Matter”? You mean the decaffeinated version of the White Lives Matter slogan? Surprise surprise — you’d probably get fired if you were just openly saying Klan slogans too… right? Is that still a fireable offense? Not to mention that on its own terms, there is a statistically observable association between All Lives Matter and implicit racism. The teacher? Just call people what they ask you to call them? People don’t get their panties up in a bunch over nicknames — it really isn’t that serious? Not to mention that he should be more concerned with his student’s well-being over the yuck he feels referring to a kid how they ask to be referred to: supportive and safe environments for trans or gender nonconforming kids greatly reduces their likelihood of depression, self-harm, and suicide. Teachers who aren’t prioritizing the safety of their students over what pronouns to address them by probably shouldn’t be in the classroom anyway. The TikToker? Companies don’t want to be associated with people making fun of food deserts, not to mention a part of the controversy was that he showed internal work documents off on his social media. And as far as the claimed tautology, I’m going to deter to the folks offering medical care on this one.

These people treating “wokeness” like the new McCarthyism aren’t really the victims they are so desperate to paint themselves as. It is damn near poetic that they are trying to enshrine the right to be a bigot by modeling it off of the Civil Rights Act… a body of law that they’d likely describe as being woke and that grew from a body of law that is actively being dismantled as time goes on. Where was this talk of discrimination when Section 2 of the Voting Right Act got cut at the knees?

I think that Paul Clement got one thing right when he said that part of the reason that Biglaw is adopting different stances is because their clientele is changing. Part of the explanation of the software company that fired TikTok bro was that they did not want him to be a representative of the company. The fact is employee speech matters — to force companies to employ vocal employees whose speech does not align with their values amounts to compelled speech.  You’d think that the people who are up in arms about censorship on Twitter would have some respect for actual First Amendment issues. Pay more attention to your customer base.

Conservatives who sipped the “anti-woke” kool-aid VASTLY underestimate how many people, especially businesses, value decorum, politeness and good social cohesion over the “freedom” to have a public square where the world’s worst ideas can metastasize.